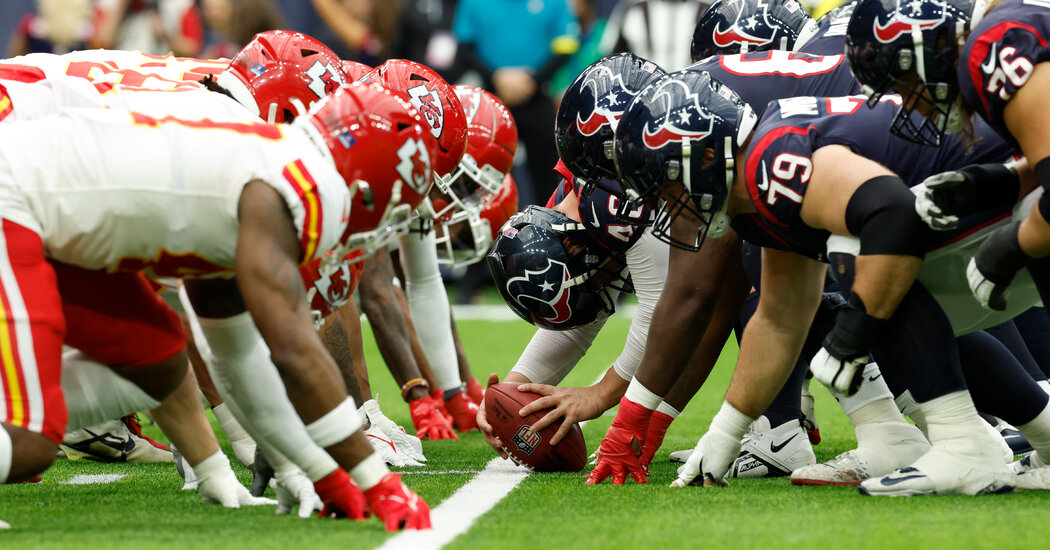 YouTube and the National Football League announced Thursday that they have reached a deal on tickets to NFL games on Sunday, bringing a mainstay of traditional television to the main streaming service.

The deal will allow YouTube viewers to watch nearly all NFL games next season on Sundays, except for those that air on traditional TV in their local markets. The game will continue to air on other networks throughout the week, including Monday night games on ESPN and ABC and Thursday night games on Amazon’s Prime Video service.

The games will be available as add-ons to YouTube TV, the company’s $64.99 streaming package, or purchased separately through its other product, YouTube Primetime Channels.

YouTube has agreed to pay the NFL about $2.5 billion a year for rights, about $1 billion more than previous rights owner DirecTV, according to people familiar with the matter. The league may also receive additional payments based on the number of YouTube subscribers Google is able to add and other performance benchmarks, the people said.

The duration of the agreement was not disclosed, but a person with knowledge of the agreement said it was a “long-term” deal that would give Google time to build its user base. DirecTV also agreed to a long-term, multi-year deal. In their announcements, YouTube and the NFL said the agreement is a “multi-year agreement.”

YouTube’s Sunday Ticket deal is a watershed moment for a media industry that has leaned toward streaming for years. NFL football games keep sports fans glued to traditional television as some viewers ditch cable for services like Netflix. The games draw solid ratings, allowing networks like Fox, NBC and ESPN to build programming lineups and sell ads around must-see TV.

But in recent years, streaming giants like Apple, Google and Amazon have entered the fray, using their deep pockets and massive platforms to negotiate. Apple now owns the rights to Major League Baseball and Major League Soccer games, and Amazon last year agreed to pay $1 billion a year for the rights to NFL Thursday night games. YouTube’s Sunday Ticket deal cements the shift to streaming.

Still, over the next decade, most NFL games will be limited to traditional television. Last year, the league struck decade-long deals with major US television networks including Fox, ESPN, CBS and NBC. In recent years, the league has attempted to generate additional revenue by selling streaming rights separately.

The Sunday Ticket package could be beneficial for YouTube, which has been keen to expand subscriptions as its main business — advertising — has stagnated. Football games may draw more sports fans to YouTube TV, already the most popular Internet-based pay-TV service.The company said in July that it had five million subscribersBeyond Hulu + Live TV.

Most of YouTube’s revenue comes from placing advertisements on user-uploaded videos. Google parent Alphabet reported in October that YouTube’s ad sales contracted nearly 2% last quarter as stubborn inflation and an economic slowdown prompted advertisers to pull back on spending.

The disappointing results added urgency to YouTube’s multiyear plans to expand in other ways.The company said in November that it had 80 million paying users Because of its music and ad-free premium service, up from 50 million a year ago.

The deal ends years of industry speculation about who will get the coveted game package, which began in 2019 when former DirecTV owner AT&T COO John Stankey said the company rethink Its a Sunday ticket deal.

In July, when NFL Commissioner Roger Goodell Say In an interview, he said streaming services are “best for consumers.” Apple, Amazon and YouTube emerged as the likeliest candidates, with all three vying for the rights.

More recently, Apple, long considered the frontrunner, decided to give up on catching up. As the talks progressed, Apple began to question whether Sunday Ticket packages were worth the NFL’s pursuit and ended serious conversations about a potential deal, a person familiar with the matter said.

Instead, Apple is focusing on closing a deal to sponsor the 2023 Super Bowl Halftime Show, which it believes will boost the profile of its Apple Music service.