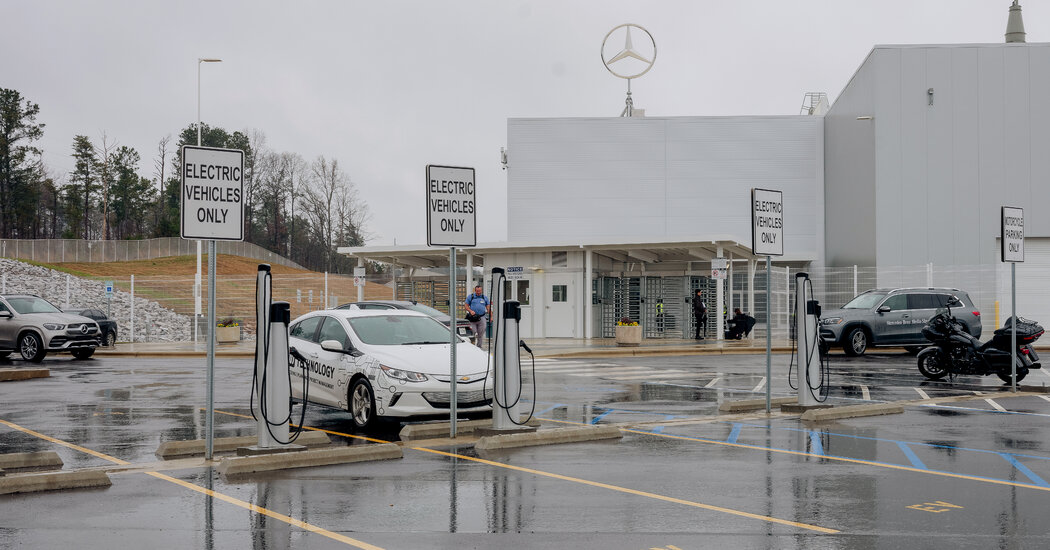 Mercedes-Benz said on Thursday it will install a network of 2,500 high-power chargers in the United States by 2027, a sign the German automaker is taking a page from Tesla and expanding its support for electric vehicles. The promise of electric vehicles.

The fast chargers at 400 stations will be operated under the Mercedes brand. Owners of the company’s cars will have priority access, although the network will be open to cars from other manufacturers.

Tesla began building charging stations years ago, and the network has been critical to the automaker’s success, reassuring car buyers that they don’t have enough places to charge their vehicles and could be stranded on the side of the road. These U.S. fast chargers will only work with Tesla vehicles, though the company says it will open the network to other brands.

Mercedes’ planned charging network is the latest sign that the company, which has ceded customers to Tesla, is serious about electric vehicles. Last year, the company opened a battery factory in Alabama and began production of the EQS electric sport utility vehicle at a plant near Tuscaloosa, Alabama.

Even when complete, Mercedes’ network would be about a third of what Tesla has now. Still, the effort is more ambitious than any by other legacy automakers. Electrify America has 3,400 fast chargers in 790 U.S. locations, but doesn’t feature the VW brand prominently, although the German company created the network and owns most of the business.

“This is a strategic decision and we will put our money where our mouth is,” Mercedes-Benz Chief Executive Ola Källenius told reporters on Thursday.

The company, already a partner of European charging network Ionity, also plans to install Mercedes-branded chargers in Europe and China, but will start in the US.

Mercedes will share network costs with MN8, a solar producer, which will supply the sites. The companies said they plan to apply for federal subsidies for companies that make the chargers.

Mercedes owners will be able to reserve charging time on the network, which will be designed to work autonomously with Mercedes vehicles so drivers don’t have to do anything other than charge their vehicles.

Pasquale Romano, chief executive of charger maker ChargePoint, said Thursday that charging and payment “everything happens behind the scenes, in an invisible way.”

The automaker plans to start building charging centers this year. At least some of these devices will pump power into cars at a rate of 350 kilowatts per hour, much faster than common chargers in the United States.

Mercedes said the hubs would be close to restaurants and restrooms, for example near luxury malls frequented by the company’s wealthy clients. The hubs will be equipped with surveillance cameras for security.

Mercedes is trying to address complaints from electric car owners that they don’t feel safe using chargers in remote areas. Mercedes chief technology officer Markus Schäfer said the hubs would be in “a secure location” “not next to bins in the backyard of a shopping mall.”